Written By: The American Academy of Estate Planning Attorneys

If you are a member of the United States military, you likely have more important things on your mind than taxes and retirement planning. You should, however, take a moment to learn how your combat pay is treated by Uncle Sam to ensure you receive the benefits to which you are entitled for your service to your country.

As a member of the military, your compensation is more complicated than the average civilian. The reason for this is that your pay is composed of several different components, including base pay, a housing and food allowance, bonuses, and special pay, if you qualify. To ensure your taxes are computed correctly, it is important to understand how your compensation is treated by the Internal Revenue Service (IRS), particularly your combat pay.

Members of the U.S. Armed Forces do not pay taxes on all of the compensation they receive, effectively increasing their take-home pay amount. Like most members of the military, you are probably aware that your food and housing allowance is not taxed. This portion of your pay likely accounts for 20-30 percent of your total compensation, meaning a quarter to a third of your compensation may be tax-free. If you served in a combat zone during the pay period in question, you may be entitled to additional tax-free income of which you may be unaware.
The IRS rules state that if a member of the military served in an area designated by the Department of Defense as a combat zone or served in direct support of military operations in the combat zone, the portion of his/her compensation that was earned while in a combat zone is excluded from income tax. Moreover, the exclusion from taxation applies to the entire month as long as you spent at least one day serving in a combat zone that month.
The amount of income you may exclude for purposes of calculating your taxable income is unlimited for enlisted personnel. If you are an officer, you may still make use of the exclusion. However, an officer’s exclusion is capped at the maximum of the corresponding enlisted pay for the time period in question.

Other Potential Exclusions from Your Taxable Income

Along with exclusions for combat pay and your food and clothing allowance, you may also be entitled to a number of other exclusions when calculating your taxable income, including, but not limited to:

While it is clearly advantageous to be able to exclude combat pay from your taxable income, you also need to understand how excluding combat pay could impact your retirement planning.
One of the most popular retirement planning tools is an Individual Retirement Account (IRA). Contributions to an IRA, however, must be made using “earned income,” meaning income from working. Since combat zone pay is excluded from your gross income, it does not qualify as earned income. Without anything further, it would appear as though the combat pay exclusion puts members of the military at a significant disadvantage when it comes to retirement planning.
Fortunately, Congress recognized this unintended consequence of excluding combat pay from taxable income, and passed the Heroes Earned Retirement Opportunities (“HEROs”) Act to rectify the situation. The HERO Act allows combat-zone pay to be considered part of earned income, for purposes of figuring eligibility for contributing to an IRA (or Roth IRA).
If you have additional questions or concerns relating to combat pay and how it affects your income taxes and retirement planning, be sure to consult with an experienced estate planning attorney near you.

Inquire Here and be eligible to receive a FREE copy of Mr. Field's book "Your Legacy Matters" 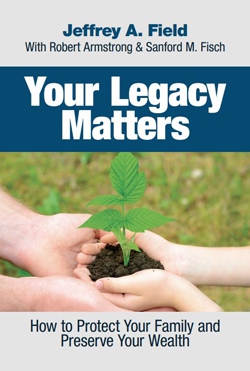 Your Legacy Matters: How to Protect Your Family and Preserve Your WealthRequest Information